The Stranger That Kneels Beside the Shadow of a Corpse
Titolo originale: Inginocchiati straniero... I cadaveri non fanno ombra! ( Film ) 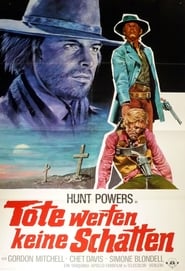 This peculiar spaghetti western from prolific director Demofilo Fidani (using the pseudonym "Miles Deem") deals with a man named Blonde (Chet Davis) tracking bounty hunter Lazar (Hunt Powers) to the mining town of Lamazos. The evil town boss, Barret (Gordon Mitchell), wants Lazar dead, so he sends a group of assassins to murder him. Lazar survives, and Barret ends up offering him $100,000 to leave town. Lazar accepts the money and travels on to a remote shack, where he tortures an old man (Ettore Manni), making him a slave. What Lazar doesn't know is that the old man is Blonde's father, and he pays for his mistake with his life, leaving the man and his gunslinging son rich after the obligatory showdown. Fidani's film is unusual in its almost hallucinatory lack of logic, creating a surreal effect aided by the cinematography of Aristide Massaccesi, who would go on to some notoriety as cult director "Joe D'Amato."