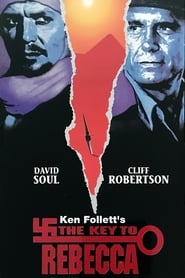 From master storyteller and best-selling author, Ken Follett, comes the exotic spy-thriller based on true events. North Africa, Summer of 1942 — master spy, Alex Wolff is on a mission to send General Erwin Rommel's advancing army the secrets that would unlock the doors to Cairo... and the ultimate Nazi triumph in the war. Wolff's pursuer, Major Vandarn, engages the seductive charm of Elene Fontana to lure him into range for what is to be a startling and explosive confrontation.