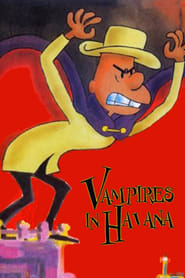 Scientists Werner Amadeus, son of Count Dracula, develops an anti-sun formula for vampires. He moves to Cuba with his nephew Joseph Emanuel. Joseph grows up drinking the formula and forgets his origin, becoming Pepe, a trumpet player mixed up with revolutionaries in 1933 Havana. Soon he will be in the centre of a dispute for his uncle's formula between vampire factions from the USA: the Capa Nostra Society and from Europe: the Vampiro Group.